Sketch: The Missing Months of Dealing With Megaesophagus! Part One

Hello again – It’s been months since I posted.  We adopted our fourth Great Dane, Sketch, and were watching he and Isaiah grow like weeds when the unthinkable happened…. Sketch bloated.  As of June 30th, 2014, our lives were suddenly very different.

Anyone who loves Great Danes and has them in their life knows, and greatly fears, bloat.  You read about it and do everything to try and prevent it from happening to your fur baby.  We did the same. We followed all the “rules” for keeping the bloat monster at bay.  Unfortunately, the bloat monster doesn’t play by the rules we were following.

Sketch underwent emergency surgery at our local vet when x-rays showed bloat with torsion (twisting of the stomach).  He pulled through the surgery like a champ and it seemed like everything would be back to normal in time.  However, as time went by Sketch wasn’t recovering his ability to eat and keep food down.  We tried everything and I do mean – e v e r y t h i n g .  He began to lose a LOT of weight and things got very scary.  He was “vomiting” pretty much everything he took in.

Our local vet did a barium study, but didn’t come up with a diagnosis for anything, they did loads of blood work and various tests…. but came up blank.  Sketch continued to lose weight and we were becoming VERY afraid of losing him. 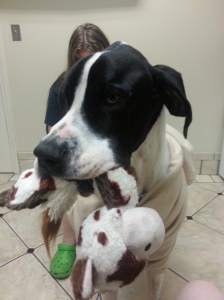 At the vet – Losing weight and losing more weight…

Then a friend sent me a website describing an illness that affects some dogs called Megaesophagus.  I read that article and a “knowing” just dug deep in my own gut and I KNEW – this is the answer. This is what Sketch is dealing with.  So, we began to learn more and more about MegaE and what to do about it and I began a dialogue with our local vet.

At home, we went ahead and began treating Sketch as if we had the diagnosis of the MegaE since everything we read about it fit him and what was going on.  We had a friend come over and build Sketch a Bailey Chair, which is basically a doggy highchair that’s used to help keep them in an upright position in order to help the food they eat move through the esophagus and on into the stomach.  Being in this upright, vertical, position gives gravity a chance to work on the food since the esophagus is no longer doing its work in pushing the food downward.

Even with all our tireless efforts with feeding Sketch, and doing 30 to 45 minute vertical holds, we still weren’t seeing much in the way of weight gain and we wanted to know if we were correct in our own diagnosis of the MegaE.  Our local vet referred us to Auburn University Small Animal Hospital for more tests. Off to Auburn we went, taking Isaiah with us for Sketch’s, and our own, moral support. 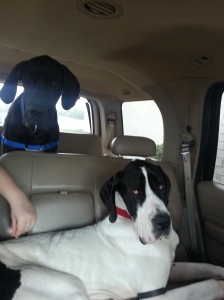 On our way to Auburn University Small Animal Hospital! 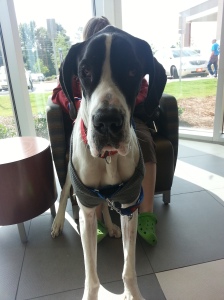 Sitting in the waiting area for our turn to see the doctors.

So, what did Auburn say?

See part two of –  Sketch: The Missing Months of Dealing With Megaesophagus!