Then they went crazy and added two more!

I’ve had puppy fever for over a year now.  Great Dane puppy fever.  Yeah…. that’s a big puppy to take on.  My beloved Streifen is four years old now – as of March 8th – so yeah… it’s been a while since I’ve done the whole puppy thing.  Being able to take care of other people’s Great Dane puppies when they board them with us has helped tremendously, but well… there’s nothing quite like having your very own.  I fought it long and hard.  I truly did cause I knew my husband wasn’t all that thrilled with the idea of having three Great Danes.  However, I lost the battle this year (2014).  In a big way.

I lost the puppy battle, but a puppy who we named Isaiah, hit the family jackpot!  At least, we think he did 🙂   I have a sneaking suspicion that he agrees!

Isaiah is part European and American Great Dane, which means he’s going to be a big boy.  He’s 5 month’s old now and already over 80 pounds!  Here’s a few pics…. 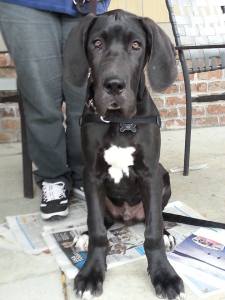 The “chair pic”, as we call it, started out as a “see how big he is compared to Streifen at the same age” kind of thing and has just become something we look forward to each month.  It’s actually time to take it again so I’ll have to post May’s “chair pic” when we take the next one!

Well, apparently puppy fever hits me seriously bad once it hits cause we actually ended up with TWO Great Dane puppies…. though the 2nd one wasn’t exactly planned…

It all started with a Craigslist ad for a FREE Dane.  A friend of mine that does a lot of rescue ran across this ad and contacted the guy.  The guy told her he didn’t have time for questions or anything else and that if she wanted this dog she’d better just come on and get him.  😦   Our biggest fear was that dog fighters would get to him.

So, she drove to Columbus, GA and saved this poor fella.  He was 8 months old then and in pretty horrible condition.  He has a large tumor on his front elbow and several small tumors inside his neck that you can’t see, but can feel.  His hair is very very thin in many places, which the guy said was because of some new bedding he put in the dogs pen.  Apparently, the poor baby had to live in this small pen pretty much all the time.  His eyes were all infected and red and gooey.  And… he was scared to death of everything.  He was over 100 lbs and he had to be picked up and put in the car due to his fear.

Heartbroken doesn’t begin to express the sadness I felt when I first met this boy.  My friend brought him to our house to stay for a couple of weeks, so we had him from his first night away from that horrible place he’d had to call home for so many months.  We were standing in the kitchen looking him over and my friend was telling me about the “sketchy” neighborhood he’d come out of and it hit me… Sketch!  His name should be Sketch!  And the name has fit… for all kinds of reasons besides his original neighborhood.

He was so scared… of everything.  I honestly looked at this poor boy and couldn’t imagine him being a puppy at all.  He acted more like an old dog.  However…. I reckon my little girl has some of what my husband calls “doggy dna” in her cause it wasn’t long and she had this boy ready to go and confront the world… as long as she’s by him!  You could say that this boy sketched his love right on her heart and hers right on his too!   They became inseparable and well… we got our 2nd Great Dane puppy!

He and Isaiah became great friends and brothers!  Even Streifen and Suki (our other two Danes) enjoy goofing off with “the boys” as they are so often called now!   You seldom find Isaiah without Sketch or Sketch without Isaiah (and my daughter lol). 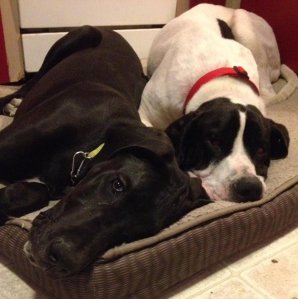 Kinda scary when I think about the fact that in this picture, Isaiah is 5 months old and Sketch is 9 months old!!!  Isaiah looks almost as big as Sketch here!  And he’s honestly not too far off…   He’s gonna be a big ole boy!

Yep, so that’s how we went crazy and added, not one, but, TWO Great Dane puppies to our family!

We are enjoying them so very much!  They bring a boat load of laughter and fun to our family.  Isaiah loves to get in any chair that he even thinks I might sit in, regardless of size….. his or the chair!  Sketch now bounds all over the house in pure joy, playing and romping with his brothers or with his little girl.  You can’t stay sad or down for long around that fella cause he sure shows you the simple things in life are worth smiling over.

Now our goal with them is to let them both give back a little and we want to give some back too…  God gave us their amazingness and we want to use it to help other people find their smiles too!  We’re going to train them into “therapy dogs!”  🙂

Check back for training and other fun stories of Isaiah and Sketch!  There’s no telling what the boys will do next!

First, I'm a follower of the Lord Jesus Christ. Grew up in the faith, but didn't truly recognize the treasure that He is until later in life. Also, I'm happily married with four children, six dogs, and one cat. Why, yes.. I did say six dogs. I know that blows many people's minds. Let me blow it a little more by letting you in on the fact that four of the six are Great Danes! Yes, I did say Great Danes. Yes, they are big, and yes they do live in the house, and yes they can eat a lot :) And most of all.... yes we are a little nutty, but we wouldn't have it any other way! Great Danes are AWESOME! The other two dogs are an Australian Shepherd and a Border Collie mix - just in case you were wondering.... :) Now that I know what it really means to follow Him who first loved me, I cherish and rejoice in who He is. I long to show others this truth so that they may also come to full understanding of what His love really means for their life. In addition to being a Christ follower, I'm also a dog trainer. Dogs just have a way of getting right up close to your heart and sharing your life in ways that not all people can. Perhaps God created dogs to show us humans how to love unconditionally in addition to being our helpers. I decided last year to go back to school in order to get my Christian counseling degree. Later, once I've graduated, I also plan to use my skill as a dog trainer to help people train their own Service Dogs for issues such as mental illness, autism, pain related illnesses, and other similar issues, along with offering counseling services for them as well. I am looking forward to seeing how the Lord will move in my life from this point forward! With God, all things are possible!
View all posts by D. Smith »
← January is National Train Your Dog Month!
Isaiah’s Five Month “Chair Pic” and an Update :) →