His Name is Streifen

and basically…. He owns us  – his family.  Most people own their dogs, but it’s kinda weird with Streifen. It just seems more appropriate to say he “owns” us.  Because of this little fact, I thought it would be nice to introduce you (my readers) to him early on in the life of this blog.  So here is the story of Streifen and how he came to be such a HUGE part of my (and my family’s) life and take over so completely.

Being a dog trainer, I’m around lots and lots of different breeds of dogs and I fall in love with the majority of them.  One day a lady, her daughter, and their puppy walked into a Puppy Class that I was to teach.  Little did I know,  from that point on, my life and the lives of everyone in my family, would be forever changed – all because of that little blue spotted Great Dane puppy aptly named Sky.

Sky was around 4 months old when they started class with her and boy was she CUTE!  Great Dane puppies are just adorable cause they’re all legs and ears for the longest time.

Miss Sky when she was around four months old.

People get to know me when they’re in one of my classes and they learn really quick that I truly love dogs and care for them as if they were my own children.  This often leads to me “babysitting” their dogs for them when they want to go on vacation and don’t want their beloved furry child sitting in a crate at a boarding facility or vets office.  And it led to that with Sky, which led to me falling hopelessly in love with both her, and Great Danes in general.   It wasn’t long at all before I KNEW I had to have one!  Had to.  Just. Had. To.

Approximately a year later, Sky’s furry mother and father were bred again and well… yeah – I HAD to have one out of this litter.  Had to. Just. Had. To. 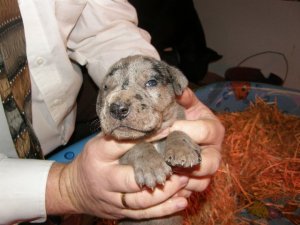 Daddy and his boy

And so my dear husband agreed and we picked out our boy from the litter when he was a tiny 2 weeks old.  We knew one thing, and that was that we wanted a boy.  When we looked over all the puppies available from the litter we immediately recognized the fact that this little fella had a stripe straight down his nose, just like his big sister, Sky.  That was it.  Love at first sight – for all of us.

We had picked out our gorgeous puppy, but what to name him?  We knew we wanted a German name, since Great Danes are actually German Mastiffs, but we didn’t want a typical German name – like Hitler or something.  Oh no.  And I prefer unique names, when possible…   So the consulting with friends started and the search for the perfect name to give to our brand new baby boy was on!   Back and forth, and on and on, and finally, my best friend found the PERFECT name for him – Streifen!  Pronounced with a long i.  The word Streifen is the German name for stripe – and a stripe is what both he and his gorgeous older sister have straight down their noses.  Maybe it’s just me, but I thought that a more perfect name would be impossible to find.

8 weeks and growing every day!

And my little baby boy grew…

Streifen and his big sister, Sky

And he grew some more.  He and his big sis, Sky, loved getting to hang out together when we “babysat” her.

The bigger he became, the stronger the hold he took on all of our hearts.

And yes, we did have a real birthday party for him, complete with a cake, presents, and hats – which he is proudly wearing in the above photo.

There is just something about a Great Dane that steals your heart so completely.  You’re the owner of a puppy one day and then before you know you’re owned by that same puppy and you know that you’ll never be the same.

So, now you know a little bit about the boy who holds our hearts in his, not so little, paw.  This won’t be the last time you’ll hear about him though… One thing people discover rather quickly about me is that Streifen is one of my most favorite subjects!   He brings us such joy that we like to be able to share little bits of him when we can.  🙂

Do you have a dog you adore?  Comment and let me hear about them!

First, I'm a follower of the Lord Jesus Christ. Grew up in the faith, but didn't truly recognize the treasure that He is until later in life. Also, I'm happily married with four children, six dogs, and one cat. Why, yes.. I did say six dogs. I know that blows many people's minds. Let me blow it a little more by letting you in on the fact that four of the six are Great Danes! Yes, I did say Great Danes. Yes, they are big, and yes they do live in the house, and yes they can eat a lot :) And most of all.... yes we are a little nutty, but we wouldn't have it any other way! Great Danes are AWESOME! The other two dogs are an Australian Shepherd and a Border Collie mix - just in case you were wondering.... :) Now that I know what it really means to follow Him who first loved me, I cherish and rejoice in who He is. I long to show others this truth so that they may also come to full understanding of what His love really means for their life. In addition to being a Christ follower, I'm also a dog trainer. Dogs just have a way of getting right up close to your heart and sharing your life in ways that not all people can. Perhaps God created dogs to show us humans how to love unconditionally in addition to being our helpers. I decided last year to go back to school in order to get my Christian counseling degree. Later, once I've graduated, I also plan to use my skill as a dog trainer to help people train their own Service Dogs for issues such as mental illness, autism, pain related illnesses, and other similar issues, along with offering counseling services for them as well. I am looking forward to seeing how the Lord will move in my life from this point forward! With God, all things are possible!
View all posts by D. Smith »
← To Begin With…
The Great Dane ♥ →